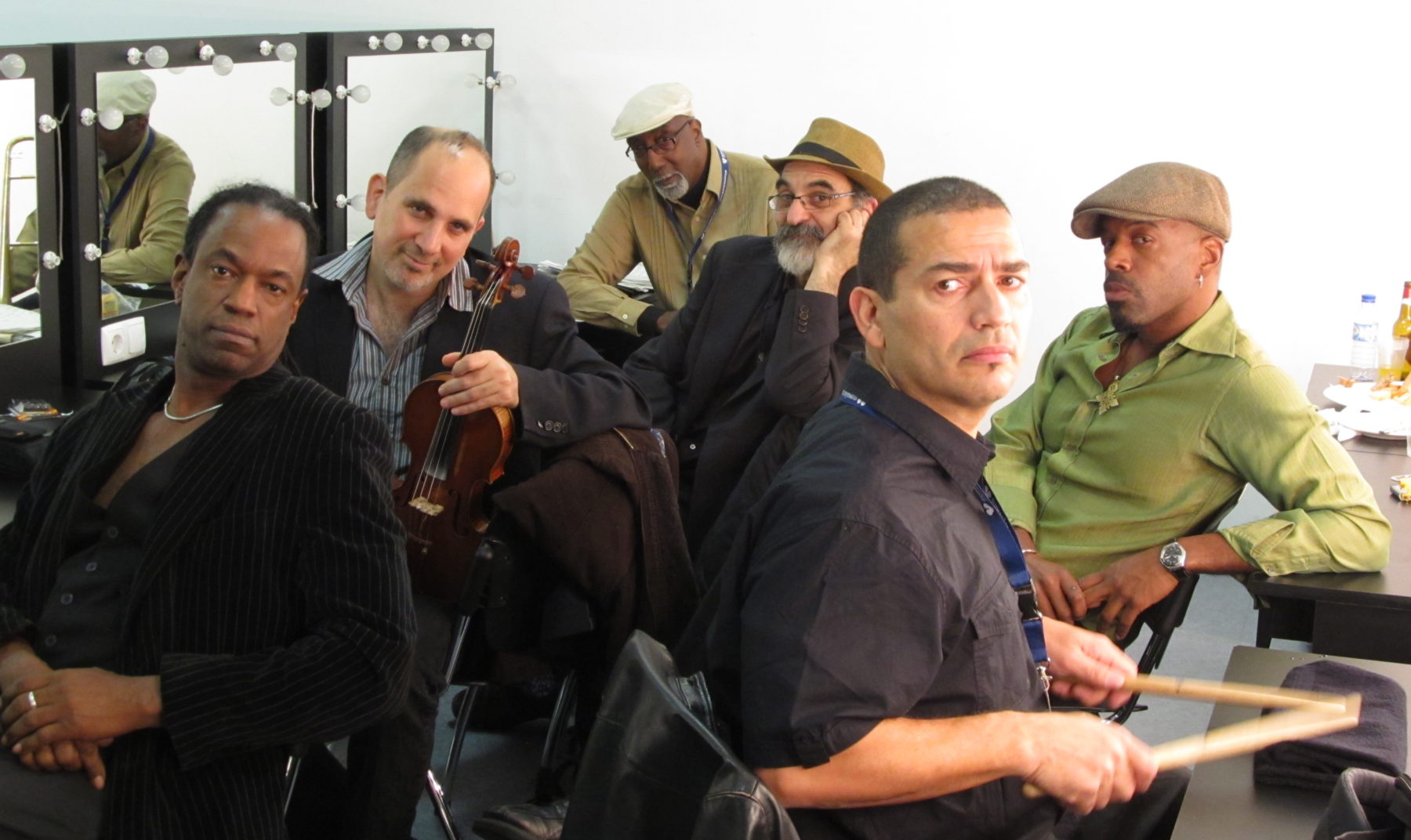 The JAZZ PASSENGERS are a fantastical fusion of post-bop and musical comedy, once called a “perverse mainstream … hard-bop group as imagined by Frank Zappa.” (Bob Blumenthal, Boston Globe, 1989).  Their name, a take-off on Art Blakey’s Jazz Messengers, reveals the musicians’ wild ride along the eccentric currents in modern American music. Saxophonist Roy Nathanson and trombonist Curtis Fowlkes, who found strong affinity in their Brooklyn roots while together in the band of the Big Apple Circus and John Lurie’s seminal band, The Lounge Lizards, founded the band in 1987.  They first broke out on the New York City avant-garde scene centering around the Knitting Factory with a hybrid of Mingus-influenced dance rhythms and original tunes complete with lyrics and/or entertaining stories.  Besides Nathanson and Fowlkes the original band members included Bill Ware on vibraphone, E.J. Rodriguez on percussion, Brad Jones on bass, Jim Nolet on violin and Marc Ribot on guitar.  Today, the members of the Jazz Passengers are Roy Nathanson (sax). Curtis Fowlkes (trombone), Bill Ware (vibes), Brad Jones (bass), E.J. Rodriguez (percussion), Sam Bardfeld (violin) and Ben Perowsky (drums).

The Jazz Passengers have toured and extensively since the 1990s, traversing the United States, Canada, Europe and Asia, appearing at major festivals and in clubs and concerts across the globe.

Early Jazz Passengers sets and recordings involved complicated and soulful compositions mixed with original vocals and comedy pieces, as evidenced in their first five albums on small independent labels: “Broken Night/Red Light”, “Deranged and Decomposed”, “Live at the Knitting Factory”, “Plain Old Joe”, and “Implement Yourself”.  The group’s trend towards vocal based composition reached a more sophisticated point with the release of the Hal Willner produced recording, and major-label debut, “Jazz Passengers In Love” in 1994.  The recording featured singers from Mavis Staples and Jimmy Scott to Bob Dorough, but it was the performance of Blondie star Deborah Harry on the song “Dog In Sand” that stood out and led to a collaboration that is still very much alive.  The band released two recordings, “Individually Twisted” and “Live in Spain” with Harry as lead vocalist, with extensive tours of performances with Harry.

In 2001, the band was commissioned to created an orchestration of their songbook with Deborah Harry “Imitation of a Kiss” (featuring the arranging and orchestration skills of Bill Ware) for performances with the Buffalo Philharmonic, the BBC Concert Orchestra and ten years later with the Northern Sinfonia Chamber Orchestra at the Gateshead International Jazz festival.  Their exploration of genre crossing original for dramatic effect was also featured in their live performances of music to the 1954 classic cult horror film, “Creature From the Black Lagoon” in 2006.

The Fire at Keaton’s Bar and Grille, 2000 (the song cycle about a mythical bar with loads of mythical guests),  The Rock Concert, 2005 (commissioned by the University of Wisconsin Science Museum to contextualize their discovery of the world’s oldest piece of geological material), You’re the Fool, 2003, (Roy’s semi-autobiographical Radio play for NPR), Jazz Passengers in Egypt (our own 1990 Marxist – as in the brothers – musical comedy featuring members of the downtown Ridiculous Theatre community. Their exploration of genre crossing original for dramatic effect was also featured in their live performances of music to the 1954 classic cult horror film, “Creature From the Black Lagoon” in 2006.

In 2010 the Jazz Passengers released “Reunited”, featuring Elvis Costello and Deborah Harry. The record title and cover of Peaches and Herb’s disco hit was called “the musical equivalent of a Cubist painting, taking elements and rearranging them in unusual and sometimes grating juxtapositions.” (blogcritics.org) In 2011 and 2012 the Jazz Passengers successfully toured Europe with the Reunited music.

The Jazz Passengers’ 30th Anniversary CD, “Still Life With Trouble” was released in 2017. “Thankfully, deep into our late 50’s and mid 60’s we’ve managed to record a CD that is a pure representation of this very particular Passengers language. It contains nine musical stories about trouble and the passage of time that describe a Still Life of odd birds native to these parts whose calls employ a variety of pitches, words, harmonies and rhythms that collectively translate into the following sentence: If there’s still life, there’s certainly still trouble!” – Roy Nathanson